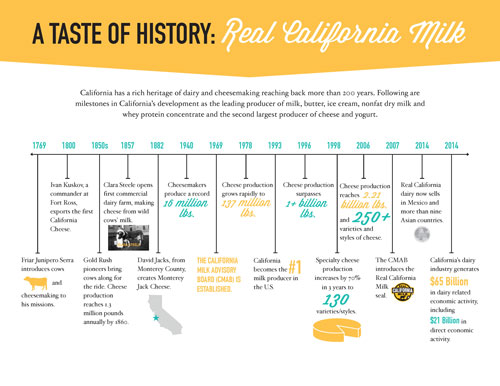 200-Plus Years of Dairying and Cheesemaking in the Golden State

California has a rich heritage of dairy and cheesemaking reaching back more than 200 years. Following are milestones in California’s development as the leading producer of fluid milk and dairy products like butter, ice cream, and milk powder and the second largest cheese-producing state in the nation.

Father Junipero Serra begins to establish the 21 missions that still dot the California coastline. He introduces many varieties of fruits and vegetables, including grapes, and lays the foundation for the agriculture industry in California. He also introduces dairy cows and cheesemaking.

In the wake of the Gold Rush, pioneers rush into California, many with dairy cows tied behind covered wagons to provide milk for infants and children. California’s milk cow population swells to 100,000 by 1860. A growing milk supply stimulates cheese production, which totals 1.3 million pounds that year.

The Steele family begins operating what is arguably the country’s first commercial dairy. Clara Steele, a pioneer woman whose family settled near San Francisco, was hungry for the Cheddar she enjoyed in her native New England. She obtains milk from wild cattle and begins to make cheese, using recipes from her grandmother’s old cookbook. Within a year, her husband and relatives are selling “Steele Brothers” Cheddar in San Francisco and other nearby markets. They start a 6,000-acre dairy farm on Point Reyes. Their 1861 production of 45 tons of cheese makes them the highest producers of cheese in the state.

The Steele family pools milk from their now several dairies and produces the biggest wheel of cheese ever seen in California – a 21,800-pound Cheddar, 20 feet in circumference and 18 inches thick. Pieces are sold at the Mechanics Fair in San Francisco for a dollar a pound to raise money for charity.

Shafter and Howard families own the entire Point Reyes peninsula, leasing individual plots to European immigrants to run dairies. Their empire grows to 31 dairy ranches, and is known for producing the highest quality dairy products.

The Shafter-Howard dairy trademarks and stamps its butter as an attempt to combat counterfeit imitations being sold. This may be the first attempt in California to brand a product.

David Jacks, a businessman in Monterey County, is the first to market Monterey Jack, which his Swiss and Portuguese dairymen develop from old mission recipes. It becomes one of the most popular cheeses in the country.

In an effort to raise production standards for California cheesemakers, the California legislature passes a cheese grading law requiring that all cheese manufactured in the state must be graded and labeled according to new butterfat content standards set by the State Dairy Bureau. As a result, California cheese reaches higher quality levels over the next decade. The Bureau also begins issuing brand names to manufacturers.

State Dairy Bureau reports California has 383 cheesemakers producing a record 7.2 million pounds. Cheese sells for an average of 13.5 cents per pound, also a record. For reasons related to weather and market conditions, production will drop in subsequent years and not regain this volume level until 1916.

Dry Jack is created when a San Francisco cheese wholesaler, D.F. DeBernardi, leaves an order of fresh Monterey Jack in storage for too long. Later, when World War I interrupts shipments of Parmesan and Romano from Italy, he discovers that aging has caused the Jack to harden and acquire a sweet, nutty flavor. Italian-American families quickly adopt this delicious alternative to the Italian hard cheeses. By the 1930s, an estimated 60 California cheesemakers are producing Dry Jack.

In an attempt to recreate Teleme, a Feta-like cheese found in Greece and nearby countries, Greek immigrants near San Francisco create an entirely new cheese from fresh cow’s milk – California Teleme. This unique semi-soft cheese has a distinctive rice flour rind.

Per capita consumption of hard cheese in California increases to 6.64 pounds. Still a long way from the 30 pounds it reached in 2001, for example, but far ahead of the 3.8 pounds reached in 1909.

1970 Cheese Production Begins to Take Off

California cheese production, which had remained fairly stable over the past 50 years, begins a period of rapid growth. Output grows from 17.5 million pounds in 1970 to 137 million pounds by 1978. This is related to rapid growth and increased productivity in the state’s dairy industry in this period.

To ensure consumers receive the highest quality cheese, California becomes the first state to establish cheese standards of identity where USDA standards do not exist. The California dairy industry creates the Real California Cheese seal to certify that the consumer is purchasing a natural cheese, made in California exclusively from California milk.

The state’s milk production reaches 25 billion pounds, making California the leading milk producer in the country. Nearly four out of every 10 gallons of milk produced goes to California cheesemakers.

Under the direction of the California Milk Advisory Board, the state dairy industry undertakes the largest promotional program yet to promote Real California Cheese to consumers. Highlighting the campaign are a series of humorous television spots claiming California’s cheese is the reason why people have come to the state to live and visit.

California cheese production passes the one billion pound mark, a milestone for the state’s cheesemakers.

The number of specialty cheeses produced in California increases by 70 percent in the past three years. The state now produces more than 130 varieties and styles of cheese.

The California Milk Advisory Board kicks off 1999 with entry into its first out-of-state market for Real California Cheese – Colorado. A year later, the campaign is expanded into Arizona.

A 2007 study reports that the California dairy industry had an impact of $61.4 billion in economic activity and created more than 434,000 full-time jobs within California.

A 2008 study reports that the California dairy industry was responsible for creating a total of 443,574 jobs and $63 billion in economic activity for the state, representing three percent of California’s job production.

The California Milk Advisory Board marked its 40th anniversary as a vehicle to promote California dairy products to consumers.

The California Milk Advisory Board introduced a comprehensive media campaign featuring California dairy families sharing their personal stories and love of dairy farming. The commercials originated as the Real California Dairy Families documentary series produced to give consumers a clearer understanding of where dairy products come from and showcase the people behind the Real California seals.

The California Milk Advisory introduced its new marketing campaign, “Make Us Part Of Your Family.” The ads feature California cows as trusted members of the family inspired by the ninety-nine percent of California dairy farms that are family-owned and the dairy products they represent.

2012 marks the fifth anniversary of the Real California milk seal distinguishing dairy products made with 100% California milk. In just the five short years since the seal was introduced, today there are over 116 processors making hundreds of dairy products that carry the seal. These products can be found throughout the United States and in twelve countries including China, South Korea, Japan, Hong Kong, Taiwan, Malaysia, Philippines, Singapore, Vietnam, Thailand, Indonesia and Mexico.