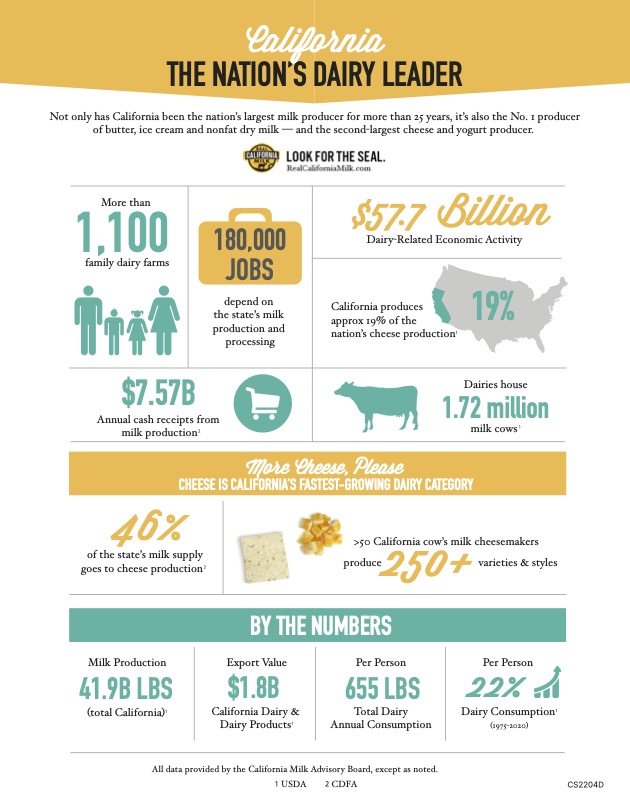 California is the nation’s largest farming state, producing more than 400 commercial food and fiber commodities, and dairy farming is the largest of these commodity groups. California has been the nation’s largest milk producer since 1993 and is also the country’s leading producer of butter, ice cream and nonfat dry milk. It is the second largest cheese and yogurt producer.

More than 1,100 family dairy farms stand at the center of the state’s vast and growing dairy industry. The state’s dairies house more than 1.72 million milk cows. California’s growing dairy business comprises not just dairy farms and their suppliers, but dairy processors and manufacturers, along with dairy products wholesalers, retailers and foodservice suppliers. In 2021, California produced around a fifth of the nation’s milk supply.

The dairy industry makes a big economic contribution to the state. According to the CDFA, dairy farming is the leading agricultural commodity in California, producing $7.57 billion in cash receipts from milk production in 2021. The milk that leaves the dairy farm flows into society to become value-added products that create jobs and revenues in local communities. According to the most recent Economic Impact Report for California Dairy, the industry contributed about $19.9 billion to the gross state product and about 180,000 jobs in California were dependent on the state’s milk production and processing.

California’s dairy industry began a period of rapid growth in the 1970s. Shifting demographics and changing tastes have played a role in this growth, resulting in a wider variety of dairy products and increased growth in certain product categories.

Cheese is California’s fastest growing dairy product and approximately 46 percent of the state’s milk supply goes to cheese production. In the period between 1990 and 2021, California cheese production grew from 702 million to 2.4 billion pounds. California’s more than 50 cow’s milk cheesemakers make more than 250 different varieties and styles of cheese. Operations range from small producers famous for their handmade cheeses to some of the country’s largest cheese plants.