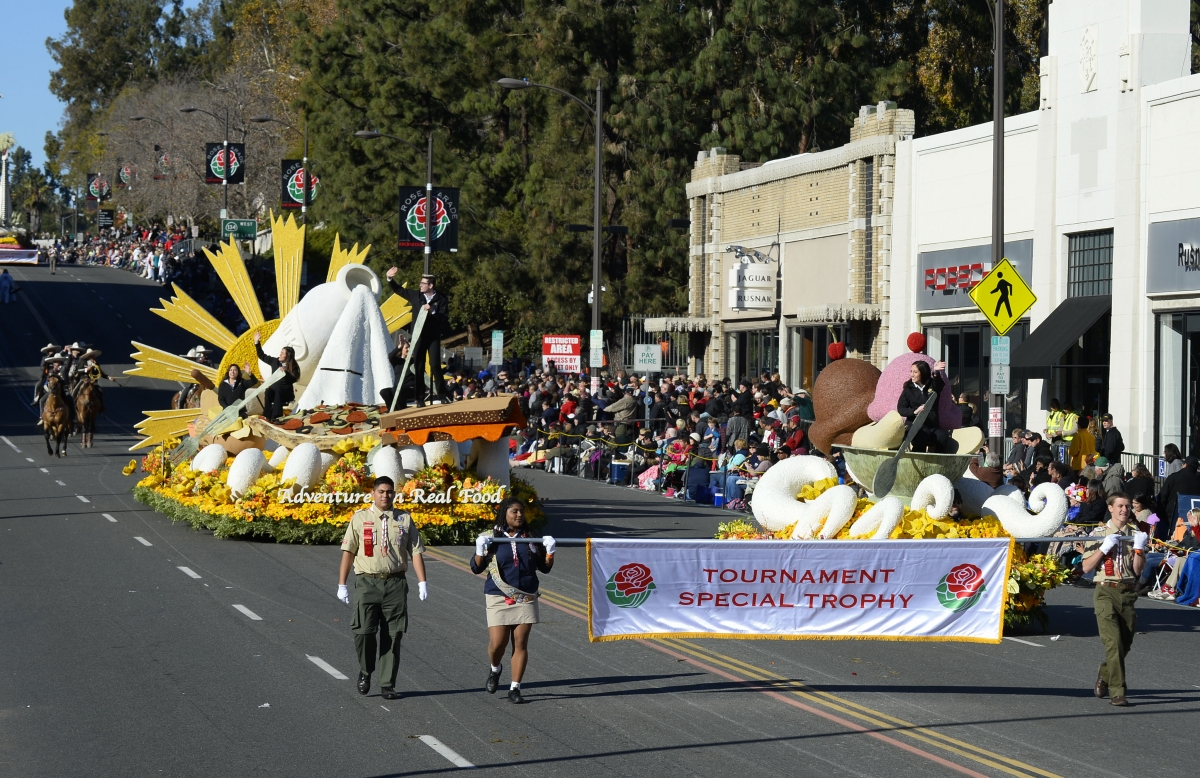 SOUTH SAN FRANCISCO, Calif. & MODESTO, Calif., January 6, 2016 – The California Milk Advisory Board (CMAB) rang in 2016 with its first ever Rose Parade® trophy at the 127th parade on New Year’s Day. The CMAB’s “Adventures in Real Food” float entry from builder Fiesta Parade Floats was recognized with the Tournament Special Trophy, honoring “Exceptional Merit in Multiple Classifications.” The trophy is one of 24 presented to the parade’s 44 float entries each year, recognizing such elements as creative design, floral craftsmanship, artistic merit, computerized animation, thematic interpretation, floral and color presentation, and dramatic impact.

“From the early stages of design it was clear the CMAB’s float entry had the right mix of floral, animation and fun to become a crowd favorite, while communicating an important message that the best culinary adventures start with Real California Milk,” said Tim Estes, President of Fiesta Parade Floats. “No better way to top off a great year working closely with the CMAB than with an award-winning float.”

“We’re thrilled to be recognized for all of the hard work the team from Fiesta, parade volunteers and our dairy farm families put into bringing the ‘Adventures in Real Food’ entry to life,” said John Talbot, CEO of the CMAB. “To be honored on a national stage for these efforts is especially rewarding.”

Keeping with the parade’s “Find Your Adventure” theme, the CMAB’s float recognized that culinary adventures start with dairy – from the cheese that tops pizza to the ice cream that turns a banana into a celebration – all provided through the state’s more than 1,400 dairy farm families. On December 31, the float received a special designation certifying it as “California Grown” (#CAGrown) in recognition of the use of over 85 percent of flowers and foliage from California growers. The #CAGrown certification from the California Cut Flower Commission was presented in a special, post-judging ceremony attended by Secretary of the California Department of Food and Agriculture, Karen Ross.

In addition to its inaugural float, January 1, also marked the national television debut of the CMAB’s 90-second “The Real California” ad, which broadcast during the ABC coverage of the parade. The long-form ad showcases some of the real California dairy families and values behind the Real California Milk seal and the “Return to Real” campaign, which focuses on the return to real food from real people, kissed by the California sun.

About the Tournament of Roses®

The Tournament of Roses is a volunteer organization that annually hosts the Rose Parade®, the Rose Bowl Game® and a variety of associated events. Nine hundred thirty-five volunteer members act as ambassadors of the organization and contribute upwards of 80,000 hours of manpower each year. The 127th Rose parade presented by Honda and themed “Find Your Adventure,” will take place Friday, January 1, 2016, followed by the 102nd Rose Bowl Game presented by Northwestern Mutual. Learn more at www.tournamentofroses.com and on Facebook, Twitter, Instagram and YouTube.